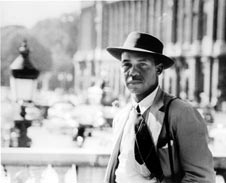 On March 1, 1913, Ida Millsap gave birth to Ralph Ellison whom she and her husband named after Ralph Waldo Emerson.  Ellison would go on to become a notable figure in his own right after writing and publishing The Invisible Man, in which he chronicled the journey of a young black man much like Ellison himself who left the Jim Crow South for New York’s Harlem only to find disillusionment wherever he went.  The title of this blog belongs, of course, to Ellison’s novel and the difficult theme it sought to explore on how the history of an “invisible” minority  is dealt with and reflected in modern American life.  In tribute to the Ellison centennial, The New York Review of Books has posted some pieces about Ellison which have appeared in the publication.  The tribute begins with the following quote from Ellison:

Perhaps more than any other people, Americans have been locked in a deadly struggle with time, with history. We’ve fled the past and trained ourselves to suppress, if not forget, troublesome details of the national memory, and a great part of our optimism, like our progress, has been bought at the cost of ignoring the processes through which we’ve arrived at any given moment in our national existence.

Those interested can read more of NYRB’s tribute to Ellison here.